Goldman Sachs: 5 Reasons Why They Were Wrong About Bitcoin 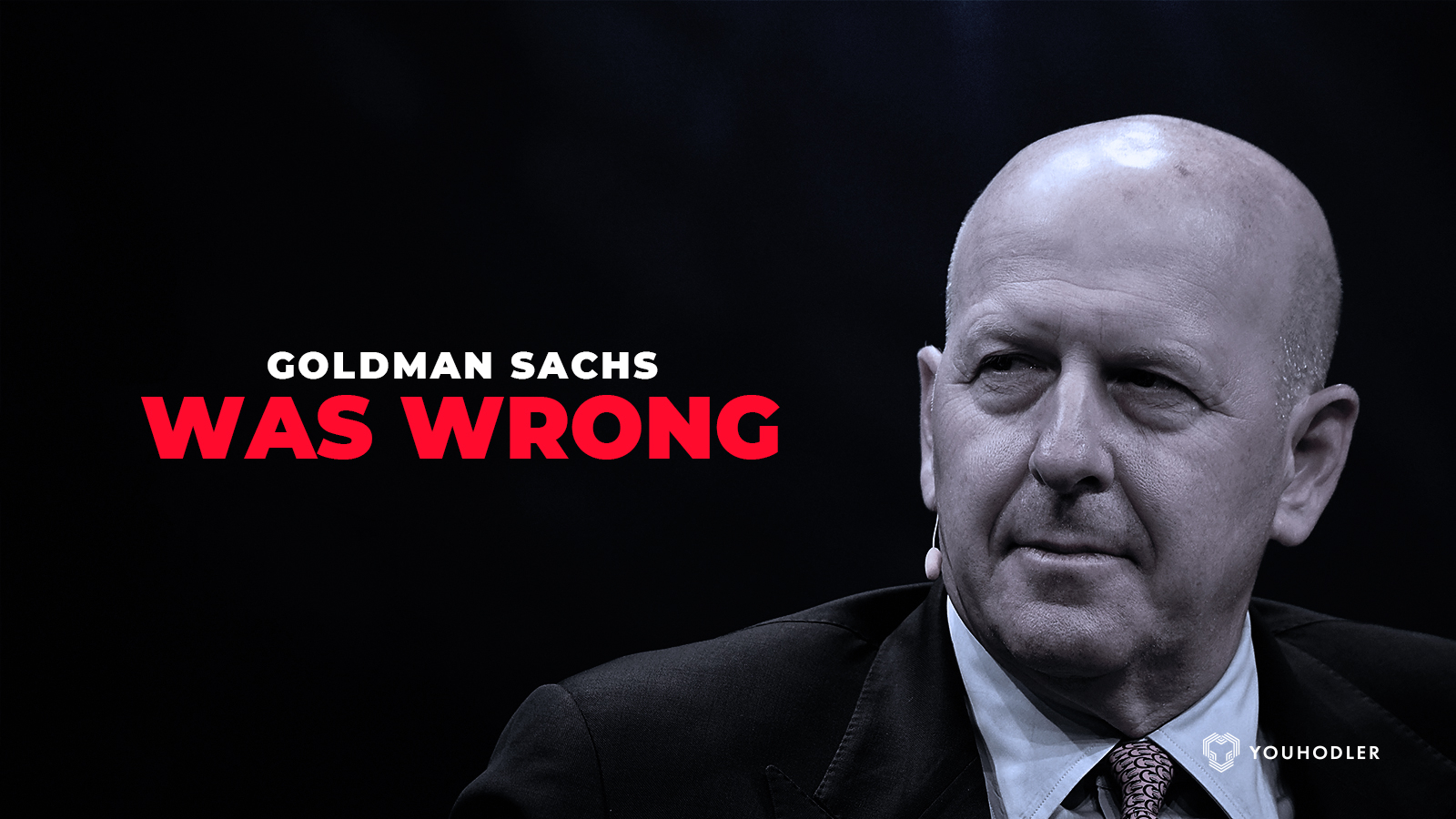 Last week, Goldman Sachs leaked the contents of a client call regarding the U.S. economic outlook and currencies such as gold and Bitcoin as potential remedies for a recession. There was a great deal of hype leading up to this event as many were hopeful the Wall Street giant would finally confess its love for everyone’s favorite digital asset. However, the exact opposite happened. Unsurprisingly, Sachs cast cryptocurrency aside, with five main reasons why we should all stay away from it. Well, now that we’ve had some time to let this report sink in, here are five reasons why the report was completely wrong.

Goldman Sachs said cryptocurrency is not an asset class

After the report came out, several top media companies published a response to Goldman Sachs saying why they were wrong. YouHodler wanted to wait a bit to see how the market reacted first and we are extremely glad we did.

Since the report came out on May 27, Bitcoin (BTC) went from a price of ~$8,800 to ~$10,200. Essentially proving to Wall Street that its opinion has little to no effect on the community’s loyalty to digital currency. The first and most controversial point Goldman Sachs made in their report was claiming that Bitcoin, and other cryptocurrencies like it, are not an asset class. They came to this conclusion by defining the features of sovereign currency and since Bitcoin doesn’t meet that specific criterion, it must not be an asset class. We can dissect this statement all day and laugh at the complete lack of logic but let’s look at this chart instead.

Bitcoin is vastly outperforming all asset classes in the world by a wide margin over the past two years and this is exactly why Bitcoin should be referred to as an asset class. For a further example, Investopedia officially states ‍

“Investment assets included both tangible and intangible instruments which investors buy and sell for the purposes of generating additional income on either a short or long term basis.”

‍That is precisely what people do with Bitcoin. Hence, making Goldman Sach's “not an asset” claim completely false.

Goldman Sachs says Bitcoin is not a scarce resource

The total and maximum amount of Bitcoins that will ever be in existence for eternity is 21 million. That is the literal definition of a scarce resource. However, Goldman Sachs claims that the crypto community has found a “loophole” to this logic using forks. In their opinion, forks such as Bitcoin SV (BSV) and Bitcoin Cash (BCH) are “nearly identical” clones to Bitcoin essentially making the resources infinite. This statement right here proves Goldman Sachs did minimal research on cryptocurrencies for this report.

If they did ample research, then they would know there are vast cultural and technical differences between BTC, BSV, and BCH, hence the need for a fork in the first place. They are far from the same and to lump all three coin’s supply into one is simply false information.

Goldman Sachs says cryptocurrency can be used for illicit activities

This is my personal favorite argument from Goldman Sachs and needs very little rebuttal to prove exactly how wrong they were. First, let’s take a look at their reasoning.

Goldman Sachs says cryptocurrency can be used for illicit activities in the four following realms:

They’re not wrong in saying this. Cryptocurrency has been used for these things in the past but then again, so has the almighty U.S. Dollar. Here are some examples:

As for the Darknet claim, yes cryptocurrency was used on the Darknet as well as other fiat currencies in cash as well. To say the US dollar is immune to criminal behavior such as the Darknet, money laundering, Ponzi schemes, and ransomware is an absolute absurdity. In fact, once widespread regulation comes into effect, blockchain technology will be far more secure, transparent, and helpful for authorities in tracking illicit activities in the future.

Front and center at point number four is this chart showcasing all of the crypto industry’s biggest failures since 2009. First of all, this is a completely biased example from Goldman Sachs. Surely if we went back in time over the past 20 years highlighting only the major US dollar hacks/losses, we’d come up with a list much longer than this. The point they are trying to make with this chart is that the infrastructure is simply not secure enough and we should not trust any of these platforms to hold our cryptocurrency assets.

‍“Inadvertent loss occurs when particular cryptocurrency tokens can no longer be spent by anyone. Between the losses at QuadrigaCX (due to the death of the sole private key holder) and Parity (due to a coding error), over $500 million of cryptocurrency was rendered inaccessible.”

That is true and that event, unfortunately, did happen. However, what Goldman Sachs completely fails to mention is the option of self-custody. This was a strategic move because it is a feature unique to cryptocurrency. Aside from holding cash under your mattress, there is no way to conveniently keep large sums of fiat currency without a bank or some financial institution. Cryptocurrency has several tools though. Hardware wallets like Ledger, for example, allow crypto investors the luxury to self-custody their assets which helps them avoid any of those hacks/losses outlined in the chart above.

For the majority of crypto enthusiasts, keeping large amounts of crypto on external platforms is widely known as poor behavior for the very reasons Goldman Sachs outlined. But since they failed to even mention the option of self-custody in their report shows how one-sided it truly is.

Goldman Sachs says Bitcoin is ineffective as a hedging mechanism

One last point that Goldman Sachs really wanted to drive in was Bitcoin’s weakness as a hedging mechanism. They cited Bitcoin’s 37% drop on March 12th as an example of why Bitcoin volatility makes it horrible for hedging. Once again, Goldman Sachs is caught using one scary instance to generalize the basis of an entire claim which is much more complex than that. One cannot make blanket statements like that in the world of finance.

The reality is, Bitcoin is not as volatile as some people believe in the long term. Looking at long term BTC growth, one will notice slow, stable growth. In the short and midterms, yes, Bitcoin is certainly known to have it’s strong ups and downs but as another note, this is actually a positive event. Due to Bitcoin’s high volatility, it allows many Defi and FinTech platforms to offer high interest on cryptocurrency/stablecoin savings accounts. Far higher than one would see in a traditional bank. Innovative traders have used these high-interest rates to enact the “crypto carry trade” strategy, which involves taking fiat, converting it to something like a stablecoin and earning high interest every year for profit.

Furthermore, Bitcoin can act as a very strong hedge depending on which market you are in. Developing countries, for example, do not have strong national currencies and in this case, Bitcoin could be a very effective hedging mechanism in the event of economic collapse. In developed markets like the U.S. and Europe, Bitcoin is not the best hedge but it is a strong diversifier for investors in the stock market, commodities market, or regional indices.

In periods of high economic uncertainty, Bitcoin is favored as a highly suitable safe-haven asset. Just look at Bitcoin’s growth every time central banks announce new quantitative easing measures, or when there is major civil unrest. More often then not, the price of Bitcoin reacts in a positive manner. Yes it’s true Bitcoin is susceptible to volatility and lack of liquidity but to say it is and never will be a good hedge represents poor research and limited foresight from Goldman Sachs.

The conclusion: Goldman Sachs was wrong

For those that missed the point of the article, Goldman Sachs was wrong. They took several parts of data from one side of a dataset and used it as a basis for their argument against cryptocurrencies. The reasoning behind this is obvious. Wall Street is threatened by the cryptocurrency, as they know its potential is powerful and bright. They want to announce when it's time for the world to embrace cryptocurrency. Many people will wait for that day but you don’t have to.

Smart HODLers and traders have known the benefits of cryptocurrency for years. As a result, they’ve flocked to various crypto platforms that help them prepare their portfolio.

So given the information covered today, absorb the data for yourself, and make an educated decision on cryptocurrency instead of listening to Wall Street giants. We could be on the brink of financial change, so make sure you’re ahead of it.