Real Estate vs. Bitcoin: Which investment is better? 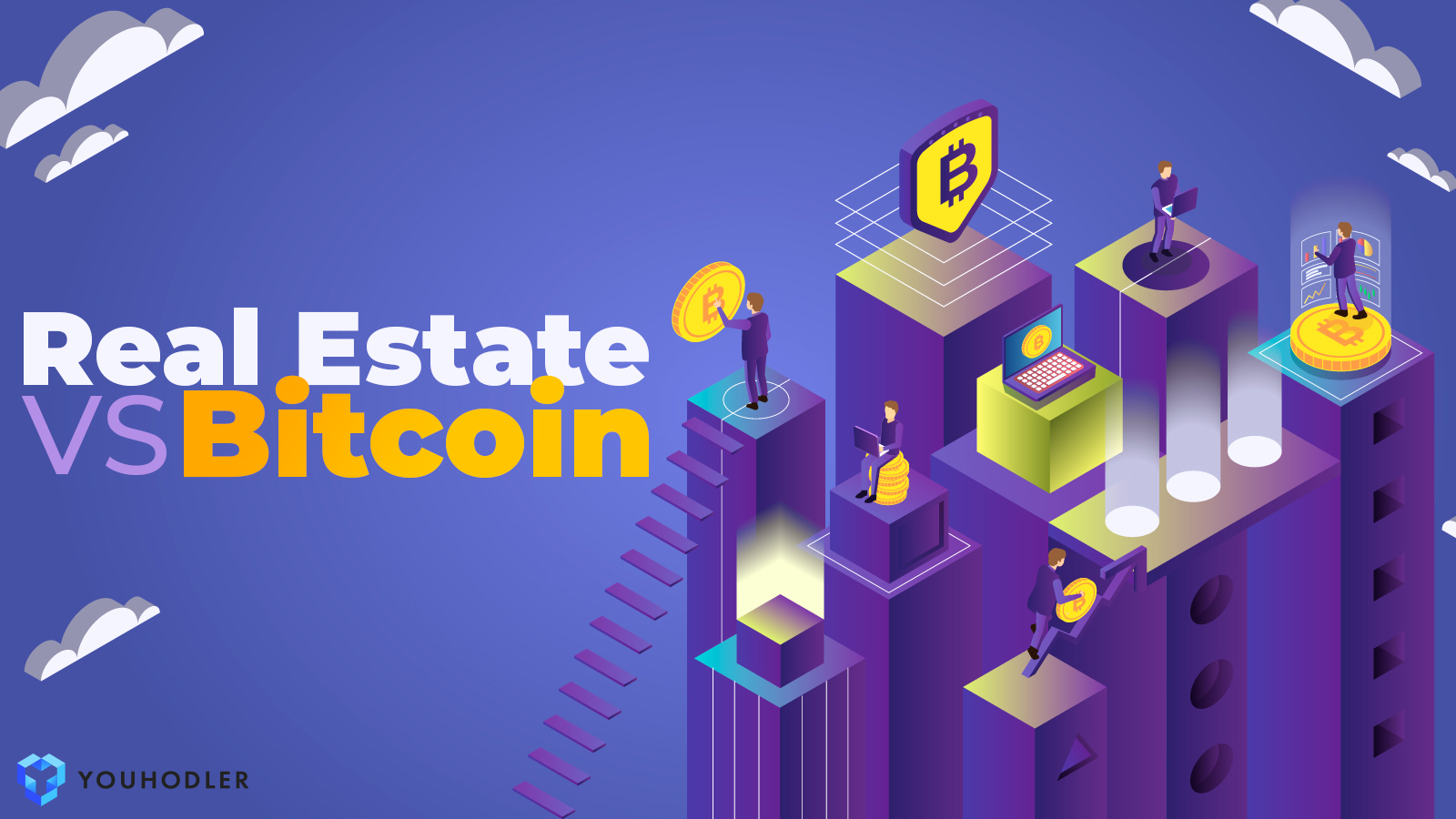 When one has extra money these days, it seems investing in real estate vs. Bitcoin is a very common argument. Instead of leaving capital gathering dust with low-interest rates in banks, some prefer to invest in different assets for higher valuations in the future. Generally speaking, real estate is a great traditional investment. However, Bitcoin offers potentially higher yields.

The popular digital currency is one of the highest-yielding assets in recent years. Since its conception in 2008, it grew in value to mouth-watering numbers. Those who bought Bitcoin (BTC) during that time and kept it until now are enjoying incredible profits. With the potential mass adoption of cryptocurrencies around the corner – due to a variety of economic factors –  Bitcoin can reach even higher highs. Therefore, it can present itself as a greater investment than real estate does.

What are the pros of investing in Bitcoin?

Despite its volatility, Bitcoin is one of the top-performing yields. This is because the idea of Bitcoin becoming an alternative to traditional currency is gaining traction. Through blockchain technology, Bitcoin is touted as an immutable currency.

As seen with its incredible run in 2021, hitting all-time highs of around $68,000 in November, Bitcoin is indeed getting the attention it deserves. Since a limited number of Bitcoin are minted, the currency is anti-inflationary as opposed to traditional fiat currencies (e.g. USD, EUR, CHF). Furthermore, it is decentralized, making it an appealing replacement to centralized currencies.

The technology it’s built on also makes it difficult to lose its value in the long run. However, the currency is far from its full potential and can continue rising at a high rate in the next few years. Bitcoin’s current value stands at +6,000% compared to five years ago, an incredible feat for an investment.

Many serious investors and entities are warming up to cryptocurrencies like Bitcoin. Banks such as JP Morgan predicted that the price of Bitcoin may reach $150,000 in the coming years. In October 2021, El Salvador also became the first country to adopt Bitcoin as a legal tender. Such activities are just the beginning of Bitcoin and cryptocurrency adoption.

As more people set their eyes on digital assets as another possible investment, their popularity might grow further. Moreover, cryptocurrencies such as Bitcoin have a lower entry barrier when compared to real estate. This allows the average investor who does not have a lot of capital to spare to start his investment journey.

The cons of investing in Bitcoin

Despite all its positive attributes, Bitcoin has some downsides as well. Digital currency is known for its high volatility. The prices might go up and down significantly from day to day and month to month. As can be seen in 2021, Bitcoin rallied to around $63,000 in April. July 20th, it went down to just below $30,000. Afterward, it reached an all-time high in August with just above $67,000 before going down to around $35,000 in January 2022. Now, it is roaming around $44,000. As one can see, the rollercoaster in prices can give someone a hard time if he or she prefers stable investments.

Therefore, it is not generally suggested as a short-term investment if one is new to the space. Knowing when to buy and sell cryptocurrencies is essential when dealing with them in the short term. However, if one looks at the longer run, the high-risk, high-reward scenario makes it worth it.

There is still a certain degree of uncertainty when it comes to regulation. Although El Salvador did recognize Bitcoin as a legal tender, other major countries are casting doubt over the technology. China banned crypto mining from taking place in the country apart from declaring all crypto-currency transactions illegal. Similarly, Russia also flirted with the idea of banning cryptocurrencies but has since come out and challenged that statement.

What are the pros of investing in real estate?

Real Estate has a great track record of price appreciation. Take, for example, the house prices in the US. During the last quarter of 2016, the average house price stood at around $365,000. Five years later, that is in the fourth quarter of 2021, it is roaming around the $478,000 mark. This is a great feat for an investment. Real estate is known to be one of the most secure traditional investments for people.

Additionally, real estate is a tangible asset as opposed to cryptocurrency. This allows one to rent out the place now owned by him or her. In return, one can obtain a passive income from the rent he or she receives. Websites such as Booking.com and Airbnb offer the opportunity for people to rent them out both for the short and long term. In truth, everyone needs a place to live, so real estate’s value is intrinsic. Not only that, but one can think of the vast types of real estates, such as studios, offices, garages, and so forth. These all provide intrinsic value to people and the demand has been growing as the world population continues to rise.

Cons of investing in real estate

As it is widely known, investing in real estate generally costs a lot upfront. Unless one has a large sum of money to spare, he or she has to obtain a mortgage to obtain real estate as an asset. Furthermore, properties generally require a high degree of maintenance. Whether it is leaking pipes, or a lamp in the bedroom not working, these things require intervention. Some see this as an obstacle as maintenance would require an owner to spare some of his time to fix or to hire someone else to do it. This, in return, can increase unforeseen costs.

Another point to factor in is that real estate is not as liquid as Bitcoin. Unlike cryptocurrencies like Bitcoin (which can be sold at any time), properties require a certain period before a deal is struck. Potential buyers/ renters have to come to visit the place, discuss it with their loved ones, barter a deal, reject the deal, find new potential buyers, and so forth. When it comes to trading real estate assets, it can prove to be an arduous and tedious process. As with any investment, the housing market is still prone to crashes too. The most recent one is the notorious 2008 crash which wreaked havoc on the world’s economy for years.

Real estate vs. Bitcoin: Which investment is better?

Both Bitcoin and real estate prices have seen significant increases during the past five years. Bitcoin, with its profit reaching over 60 times that of the original five years ago, proved to be the best. Purchasing and maintaining digital currency requires less effort and maintenance. Furthermore, if the past five years had to repeat themselves, holders of the digital currency have the potential to reap extraordinary rewards in the long run. Despite its volatility and speculative feel, the digital asset might prove to be one of the greatest investments one can make during the coming decade.

When one factor in its liquidity, large-scale corporate adoption, and anti-inflationary properties, it certainly seems now is a favorable time to enter the Bitcoin market. That being said, one should always invest wisely, conduct due diligence and consult a professional if there are any questions.

If you have Bitcoin already, then visit YouHodler to discover new ways to use BTC.