We use cookies to improve your experience. Cookie Declaration
ACCEPT ALL
TWYour crypto journey starts here. Win a trip around the world for $100. Learn more 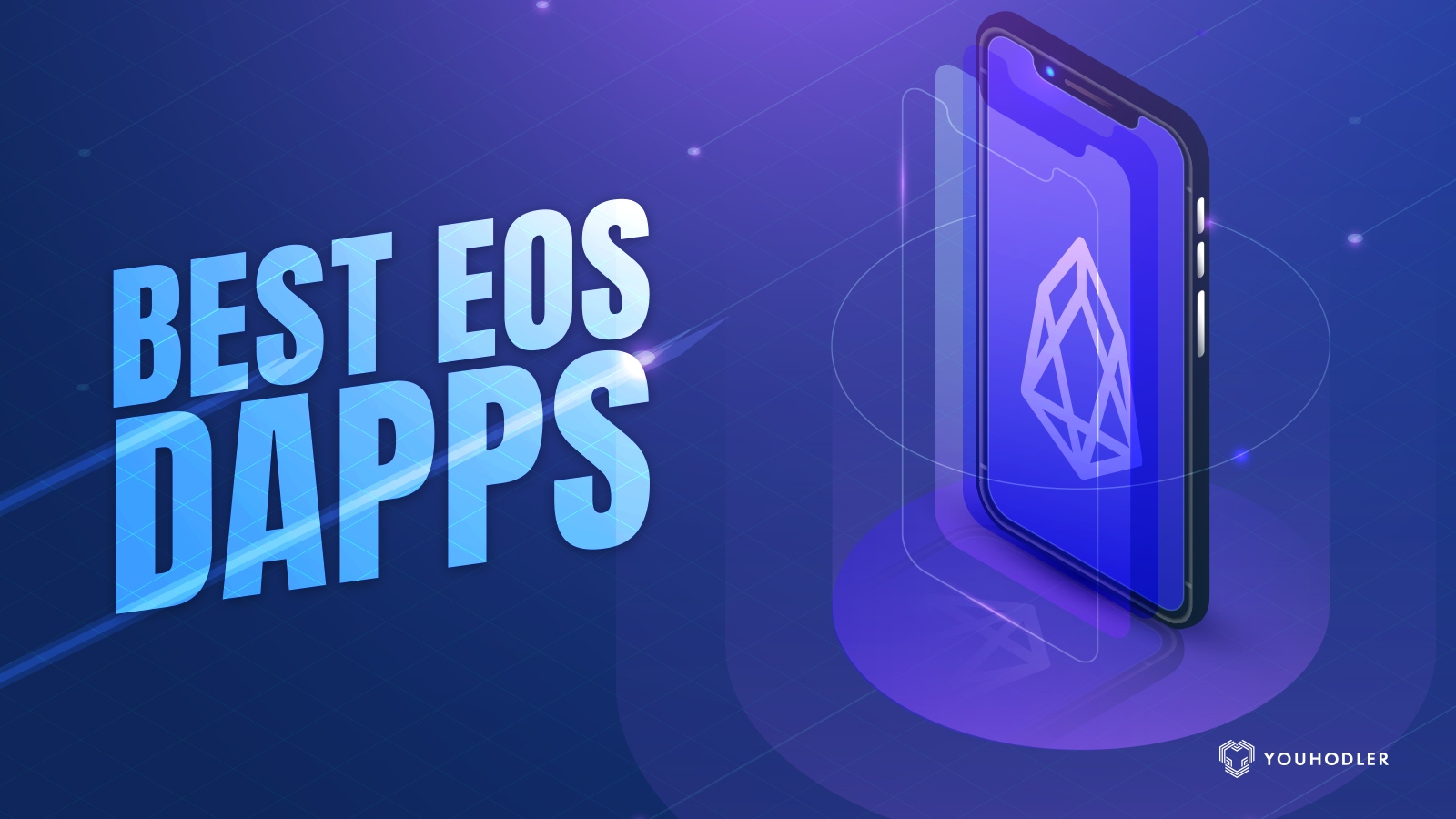 EOS blockchain is a decentralized operating system and it can support an ecosystem of millions of commercial-scale decentralized applications. There are 686 active DApps now and the EOS Dapps ecosystem saw transactions worth $1.74 billion in the first quarter of 2021.

In this article, We will present you with a list of top seven active EOS DApps currently.

EOSBet is an EOS Dapp and it is considered among one of the best-decentralized gambling DApps. It was the first open-source casino to be accorded with a license by Curacao E-Gaming, which is one of the most established and respected online betting controllers in the world. One of the most popular features of EOSBet is that its users can also earn dividends by holding on EOSBet's token known as the BET token.

EOSBet ensures fairness in betting through its novel randomness generation technique. They allow you to leave the seed blank or submit your seed and your bet is encrypted with a predetermined private key by EOSBet's server after receiving a unique ID in a smart contract. As per DApp.com, EOSBet has 26,694 active users and they have seen a total transaction volume of 644,710,041.64 USD so far. The EOS DApp offers games like Dice, Hilo, Baccarat, Crash, and Blackjack for betting.

Newdex was the first global decentralized exchange based on the EOS DApps blockchain infrastructure. It was founded on August 8th, 2018 and it was launched on EOS first. The exchange is operated and maintained by Newdex Inc.

Newdex is a trustworthy, highly secured, open, and transparent exchange. They offer convenient trading to its users and their exchange platform was first to achieve seamless cooperation between a wallet and exchange platform. There have been 57,837 total unique users, 40,605,671 transactions, and 3,305,290,528.42 USD worth of transaction volume on Newdex's exchange so far.

Everipedia is an online encyclopedia. The company behind Everipedia EOS DApp is known as Everipedia Inc and it was founded in December 2014 by Sam Kazemian and Theodor Forselius, whereas Everipedia's website was launched in January 2015. The EOS DApp of Everipedia Inc is considered as Wikipedia's blockchain rival. Everipedia users can create Wikipedia-style pages on any topic using videos, pictures, and links. The users are rewarded with IQ tokens for contributing to the website by writing, editing, and voting on the credibility of the articles.

The cryptocurrency currency token of Everipedia is denoted as IQ and their current circulating supply is 7,532,362,946.594 IQ. Everipedia has 13,644 active users with 5,839.92 USD worth of transaction volume currently.

There are 72 Sense chat users currently and there have been 145 transactions so far on the Block.One's EOS DApp so far. Sense chat's token is denoted as SENSE and their current circulating supply is 508,816,362 SENSE, whereas their total supply is 1,455,335,980 SENSE. The Sense chat team has announced the launch of Sense chat 2 and it will be blockchain agnostic application. However, the users would be able to connect to an EOS account.

BancorX is an EOS DApp and they introduce themselves as "the first Cross-Blockchain Decentralized Liquidity Network." BancorX users can convert their tokens across the blockchain without depositing funds on an exchange and hence, they do not have to engage in any exchange-based order matching between sellers and buyers. The conversion between EOS & Ethereum is enabled by BancorX through the Bancor Network Token, which operates on both EOS & Ethereum.

Chintai is a fully functional peer-to-peer EOS DApp which allows its users to lease their EOS tokens and thus EOS token holders can generate an income through leasing. It also provides critical resources that are needed by the DApp developers and hence, Chintai offers a win-win situation for both DApp developers and EOS token holders. On top of this, Chintai doesn't charge any fees as it is a fee-less platform. EOS Detroit, EOS Nation, Oracle Chain, EOS New York, EOS Cannon, EOS 42, etc are some of the biggest names sponsoring Chintai.

The Chintai token bidding cycle assists Chintai platforms in the price discovery process which helps set the lease market price. There are 26,275 unique users on Chintai and their EOS DApp has seen 343,218 transactions and 465,989,413.17 USD worth of transaction volume so far.

Want to earn a stable income? Learn more about YouHodler’s savings account to earn interest on your passive crypto or stablecoins.

EOS Racing is a car racing EOS DApp. EOS racing offers its users a reliable and fully-decentralized game economy, where the in-game items are not sold by the company as only the game users can create the items and trade them on the platform. Hashed, Token Pocket, Wombat, and Starteos are the partners of EOS Racing.

An EOS account is required to participate in the game and the user receives a free tier 1 racing car after registration. The users will have to stake some EOS to start playing the game unless they are using the Wombat wallet. Wombat helps users play the game as Wombat offers its users with unlimited CPU service. EOS racing users can enjoy the race and get rewarded for participating in the game. The EOS racing game has 5007 active users and they have seen 616,944 transactions along with a total transaction volume of 17,353.09 USD so far.

YouHodler vs. Celsius Network: A Comprehensive Review
Dogecoin (DOGE) Price Prediction: Where Will This Meme Coin Go?
YouHodler Quarterly Review: Q2 2021
Win a Trip Around the World (and more) for Just $100
ALL POSTS